Famine and dearth feature with remarkable persistence in the histories of early modern Britain and Mughal India. In Britain, their effects and intensity varied locally, but in some cases (e.g. 1590s) the crises were experienced across the nation. In India, famines occurred throughout the Mughal period in the Northern provinces, Bengal, and the south. Despite differences in scale and local ecologies, both contexts register chronic instabilities, sharp contrasts, and fears generated by the close proximity of plenty and dearth. National and local economies struggled to build physical infrastructures to cope with uncertainties of climate and create a secure agricultural environment.

This was, moreover, a formative period for cultural and economic interactions between the two countries. British emissaries travelled frequently through famine-ridden Indian terrain, along with local migrants displaced by shortages. The experience of constant mobility and unsettledness was shared by Company men and local populations. Indeed, British travellers to India were familiar with negative ecological consequences of dearth-driven vagrancy and displacement in their own national context. Conditions for the exchange and interaction of cultural understandings of famine, dearth, and ecological ethics were thus created.

Our project began with the preliminary findings summarised in the table below. The famine chronologies of the two countries in this early period are uncannily parallel, matched almost decade by decade, until the mid-eighteenth century, after which famines seem to no longer afflict Britain, although they continue unabated in India.

It may be argued that the reasons for this remarkable parallelism were climatic: the links between severe El Nino events, the coldest periods of the Little Ice Age, and droughts in tropical regions, have long been the subject of investigation among climate historians. It is intriguing to find that the documentation of famine and dearth in historical and literary sources suggests such striking correlation between India and Britain across two and a half centuries. The table shows the most acute points of crisis, as represented in the existing historiography of famine and dearth for both nations, covering the period 1550-1800. The contents of our database focus mainly on textual selections from the years specified here, but where appropriate and feasible we have also tried to represent some of the localised and less widespread food crises outside these years. The comparative approach of the project places the historical contexts of famine and dearth in India and Britain, as well as their research contexts, on an interactive platform. 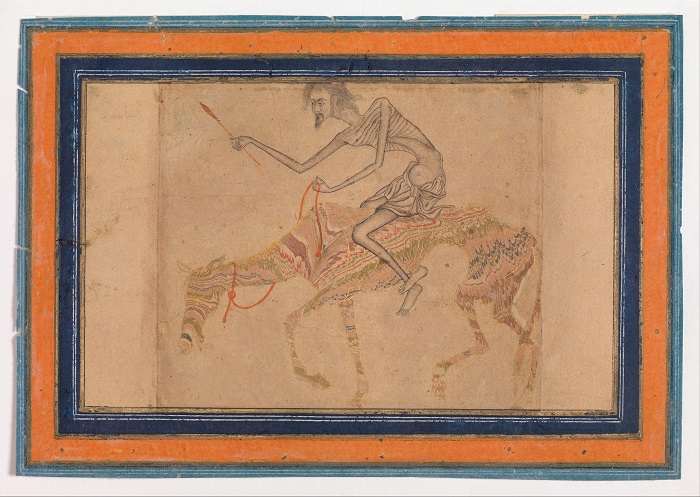 The emaciated horse is a generic image of mortification in seventeenth-century Indian painting and poetry. The style of marbling and pouncing is typical of Deccan art in the period, which created symbolic representations of mystical Sufi thought, the spiritual goals of fana and baqa (annihilation and subsistence in the divine). The starving bodies are similar to physical depictions of the legendary Majnun and portraits of Sufi ascetics, who demonstrated the power of renunciation in times of dearth. This motif was also influenced by Renaissance allegorical images of starvation, death, and the “pale horse” in the work of Dürer and Bruegel. Deccan artists were known for their subtle adaptations of European artistic styles and images.