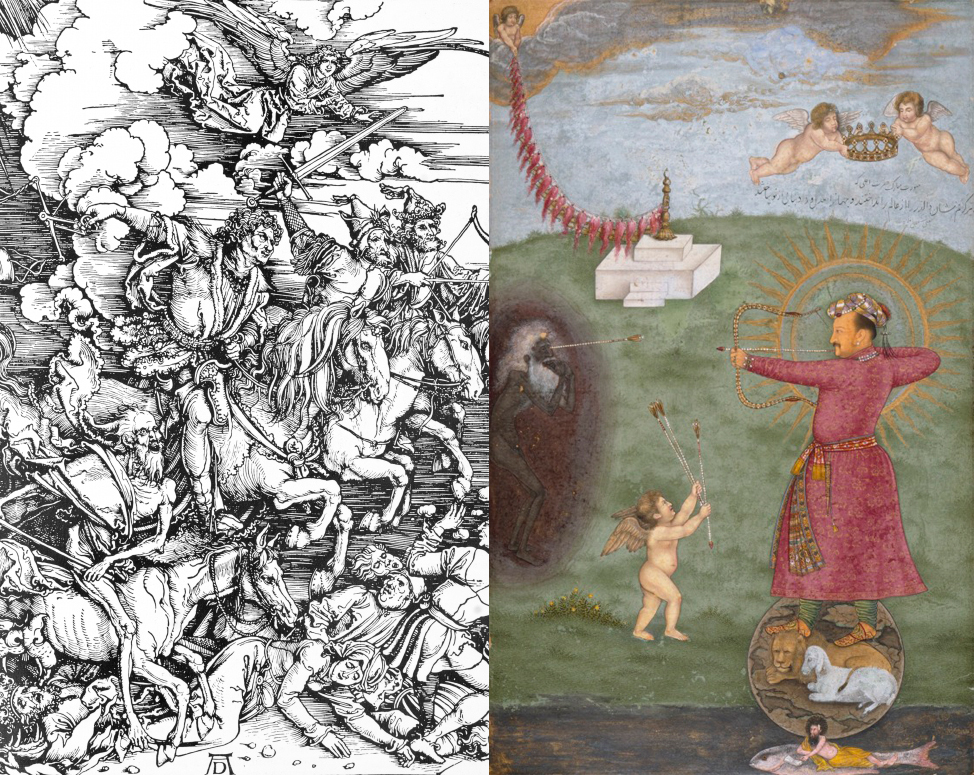 Left-hand image: Detail of 'The four horsemen of the Apocalypse' engraving by Albrecht Dürer, 1498, focusing on the figures of Death and Famine.

The Universal Declaration on the Eradication of Hunger and Malnutrition was adopted by the first World Food Conference convened by the General Assembly of the United Nations to develop "ways and means whereby the international community, as a whole, could take specific action to resolve the world food problem within the broader context of development and international economic co-operation". The term "Food Security" was introduced and defined in supply terms.

The World Food Summit emphasised demand and access issues as well as supply, stating that food security "exists when all people, at all times, have physical and economic access to sufficient, safe and nutritious food to meet their dietary needs and food preferences for an active and healthy life".

The World Food Summit: five years later called for "an international alliance to accelerate action to reduce world hunger". It was attended by delegations from 179 countries and the European Commission, and offered a forum for all 'stakeholders' in the fight against hunger -- government officials; farming, forestry and fishing communities; NGOs; the young; and indigenous groups. See Right to Food Guidelines.

FAO et al published The State of Food Insecurity in the World . This edition described improvements made by the FAO to the prevalence of undernourishment (PoU) indicator that is used to measure rates of food insecurity: revised minimum dietary energy requirements for individual countries, updates to the world population data, and estimates of food losses in retail distribution for each country.

Formation of the UK Government's Department for Environment, Food and Rural Affairs, responsible for "safeguarding our natural environment, supporting our world leading food and farming industry, and sustaining a thriving rural economy".

The policy aimed to "promote Scotland's sustainable economic growth by ensuring that the Scottish Government's focus in relation to food and drink, and ... [its] work with Scotland's food and drink industry, addresses quality, health and wellbeing, and environmental sustainability, recognising the need for access and affordability at the same time."

This strategy provided "an overarching government framework to facilitate a more coordinated approach to food research and innovation across the UK." It put current programmes "within the context of broader goals" and highlighted "examples of past successes and good practice."

This project explored the "increasing pressures on the global food system between now and 2050, highlighting "decisions that policy makers need to take today, and in the years ahead, to ensure that a global population rising to 9 billion or more can be fed in a fair and sustainable way."

The Food Corporation of India was set up to fulfil the government's food policy objectives.

The National Food Security Bill was introduced in Parliament (Lok Sabha). According to the Lok Sabha committee report, "Food security means availability of sufficient foodgrains to meet the domestic demand as well as access, at the individual level, to adequate quantities of food at affordable prices." The bill marked a shift in addressing the problem of food security "from the current welfare approach to a right based approach." See report of expert committee, final report of standing committee.

This Research Network, funded by the Arts and Humanities Research Council, and supported by English Heritage and the Peninsula Partnership for the Rural Environment (PPRE), aimed to advance understanding of both early modern and modern cultures of sustainability through collaborative research. Through a series of workshops and a conference, it brought together scholars from across the humanities and social sciences, including specialists working on regions other than Britain, to consider the expression, negotiation and transformation of notions of environment and sustainability over time and place.

The need for research to help secure global food security and ensure resilient land management lies at the heart of the Alliance between the University of Bath,University of Bristol, University of Exeter, Rothamsted Research and Cardiff University. It is characterised by cross institutional working and cross-disciplinarity with each institution having a strong record of relevant research with well-established funding relationships with research councils, government departments and the private sector. The Alliance unites individual research strengths and is one of the leading international players in agro-food and land-based research.

The Meterological and Botanical History of the Indian Ocean, 1600-1900

This network addressed the sense of global concern associated with the threat of anthropogenic climate change.  It uncovered historical records that help us understand climate and environmental change in the last 400 years. European intellectual engagement with the environments of empire over four centuries produced a corpus of documentary sources on the environment. The use of colonies for environmental experimentation resulted in locations in South Asia, Southern Africa, Australia and islands such as Mauritius becoming open-air laboratories for scientists attempting to understand, investigate, and manipulate a world of new peoples, species, environments and diseases. These sources have rarely been examined for the information they contain on environmental and climate change.

Opportunities and risks for farming and the environment at landscape scales

This project is part of the Sustainable Intensification Research Platform (SIP) a multi-organisation research programme, established and funded by Defra to collectively explore the opportunities and risks for SI, from a range of perspectives and at a range of scales across England and Wales. Collaboration is vital to SI. At the heart of the SIP is a community spanning farmers, industry experts, academia, environmental organisations, policymakers and other stakeholders.

Smith School of Enterprise and the Environment

The Smith School of Enterprise and the Environment is a leading interdisciplinary academic hub focused upon teaching, research, and engagement with enterprise on climate change and long-term environmental sustainability. It works with social enterprises, corporations, and governments; it seeks to encourage innovative solutions to the apparent challenges facing humanity over the coming decades; its strengths lie in environmental economics and policy, enterprise management, and financial markets and investment. These strengths are complemented by close ties with the physical and social sciences, and especially the research and teaching programmes of the School of Geography and the Environment, the Environmental Change Institute, and the Transport Studies Unit.