Food security is a complex and polemical issue, but its currency and importance are hardly debatable given present concerns about environmental change, resource management, and sustainability. Largely investigated within the disciplines of the sciences and social sciences, in current or very recent historical contexts, the concern about long-term availability and distribution of food, has, nevertheless, a history that can be traced far back. Temporally, this project considers food security from an early modern perspective, and geographically and culturally, it compares attitudes towards this concern in India and Britain. It aims to recover and define the practices, discourses, and literary modes through which these selected past societies articulated concerns about food availability and distribution.

Funded by the AHRC, this project is led by Dr Ayesha Mukherjee (Principal Investigator, Department of English, University of Exeter) and Professor Amlan Das Gupta (Co-Investigator, Department of English and School of Cultural Texts and Records, Jadavpur University), further assisted by the collaboration of Professor Azarmi Dukht Safavi and her team at the Institute of Persian Research, Aligarh Muslim University. The research for the project, carried out by Mukherjee (PI), and supported by the teams at Aligarh, Jadavpur, and Exeter, has uncovered multilingual primary sources and images relating to famine and dearth in India and Britain, 1550-1800, held in national and local archives and libraries in Britain, Bangladesh, and India. Selections from these sources have been transcribed and encoded by research fellows and interns at Jadavpur, Aligarh, and Exeter, who have worked with the Digital Humanities team at Exeter to create a website and database from the materials. Some of the vernacular sources have been translated into English by individual members of the project team. A workshop on "Food Security and the Environment in India and Britain", supported by the project partner, the Smith School of Enterprise and the Environment, University of Oxford, was held in 2015 to discuss the early findings, and test and debate relationships between the primary sources and digital technologies which underpin the project's analytical framework. The project has thus drawn together an international team which mirrors the diversity of its range of primary materials. 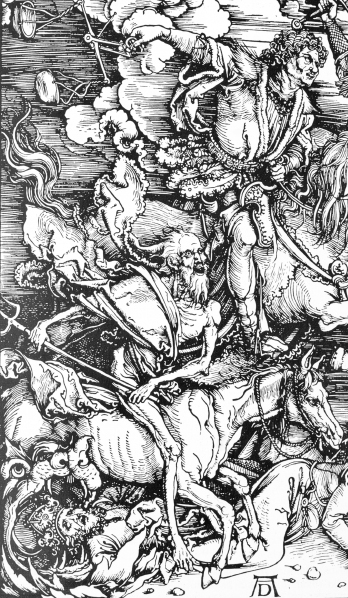 Detail of 'The four horsemen of the Apocalypse' engraving by Albrecht Dürer, 1498, focusing on the figures of Death and Famine.